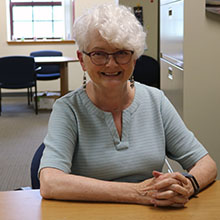 Jane Tedder’s role in Wheeler’s success is both subtle and wide-ranging.

Tedder first came to Wheeler in a consulting role when former executive director David Berkowitz asked her to examine Wheeler’s education services. With a long career and background in education and nonprofit organizational management, she says the experience was eye-opening.

“At the time, I was aware of Wheeler, but only in the area of education,” she says. “Through my project, I became much more familiar with the full scope of services, which was impressive, and I became engrossed in what Wheeler was doing in so many areas.”

She joined the board later, bringing her unique knowledge and background to the governing body then comprised heavily of business and community leaders.

“It was an interesting experience, being new and also having a background very different from many of the others. Sitting next to long-time smart leaders like Ray Corsini or Ken Boudreau, I saw right away that this was a very committed group of volunteers. That was exciting.”

She recalls David Berkowitz’s passing as a deep personal and institutional loss, and feels that the board coalesced around a continuation of his work—and new directions—in its wake.

“It was a difficult time for everyone. The board, in its wisdom, chose Susan to carry us forward, and she had that confidence and awareness of where we could go.It’s clear we made the right choice. She has very good instincts and daring, which were and are crucial in a leader.However, at the time it was fascinating, we were really in the middle of our organization reinventing itself. So many big decisions about Wheeler’s future were fraught with peril especially as when we decided to become a federally qualified health center. It was clearly the right thing to do.”

After leaving the board, Tedder became heavily involved in the philanthropic work of her alma mater, Regis College. She currently serves as a Trustee and has chaired that board’s institutional advancement committee for several years.During that period, the university launched a bold new capital campaign and restructured its annual fund raising efforts. Tedder found herself learning much about the world of philanthropy and the pragmatic steps to encourage people to contribute.It was this fundraising experience in a higher education that brought her back to her time with Wheeler, and suggested how some of her new knowledge and skills might help.

“I recall one Wheeler Board meeting years ago when Courtney Bourns spoke passionately about the need to increase Wheeler’s philanthropic efforts.At the time, I thought, ‘Please don’t ask me to ask for money. I will give, but don’t ask me to ask.’ My Regis experience flipped that. I saw that if I cared about something, I had to ‘show up.’ And that meant ‘show up’ financially.I have a competitive streak and wanted to blow the Regis campaign out of the water. To do that, leaders and alumnae had to step forward. If you don’t have a goal, you’ll never accomplish anything.But if you don’t ask people to help, they are not inclined to give.We shouldn’t be reluctant to ask individuals to join us in a cause.”

For Wheeler’s 50th anniversary, Tedder is helping to reengage her former trustee peers, and made a leadership gift herself in honor of the historic moment.She also offers guidance on long-term approaches and philanthropic strategies.

Despite her more than decade of service in multiple aspects of Wheeler’s work, she says the benefits go both ways.

“I don’t feel like I’m a leader. I feel like I’m a do-er,” she says. “I have always taken away as much as I gave from my time with Wheeler. I’m just captivated by what we do.”

Donors to Wheeler honored retired President and Chief Executive Officer Susan Walkama, LCSW, by contributing more than $38,000 in her name, spurred on by the challenge of an anonymous $25,000 matching gift. The total raised to support the program, between the match and the contributions, exceeds $63,000.