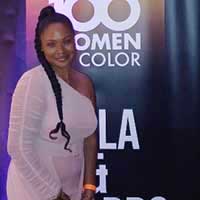 Kalisha Yopp, LMSW, supervisor, Wheeler’s Community Support for Families (CSF) program, has an unwavering commitment to the New Britain community, and she has dedicated her life and career to serving its most vulnerable families.

A lifelong resident of New Britain, and one of the leaders of a program serving at-risk families in this community, Kalisha was honored last month at the 100 Women of Color Gala & Awards event at Simsbury Meadows Performing Arts Center. The award recognizes the contributions of women of color in business, education, entrepreneurship, entertainment, government, public service, and the impact they have made on the lives of people throughout the Connecticut and Western Massachusetts communities.

Kalisha’s career at Wheeler began nearly 20 years ago. A (then) student at Central State University, Kalisha started as an intern in the organization’s LifeLine program and eventually became a full-time staff member in this program, successfully balancing the demands of higher education. LifeLine, funded by the Connecticut Department of Mental Health and Addiction Services, supports women and their children from Greater New Britain with substance use and psychiatric disorders as they progress through recovery. Additionally, Kalisha has held various positions within Wheeler and rose to a leadership role in the Community Support for Families program in Department of Children and Families (DCF) Region 6 (New Britain and Meriden), a position she’s held for the past 10 years.

Community Support for Families helps families to strengthen natural and community support systems to maintain safe and healthy home environments and address issues such as employment, childcare, homelessness, truancy, access to medical care and/or behavioral health care, parenting support, domestic violence, and access to basic needs, and more. The program is funded by DCF and serves families in DCF Region 6 (New Britain/Meriden) in partnership with the Human Resources Agency of New Britain, and DCF Region 4 (Manchester and Hartford). Since its inception, more than 4,500 families have been served.

Kalisha holds a bachelor’s degree in Social Work from Central Connecticut State University and a master’s degree in Social Work from the University of Connecticut and is currently a Licensed Master Social Worker (LMSW). Outside of work, she is an active volunteer in the New Britain community. She serves on the school PTA/PTO, voluntarily teaches financial literacy workshops at local afterschool programs as well as within the schools during Career Day, and runs a Women’s Empowerment Group and Women’s Empowerment Book Club.

Kalisha reflects on the 100 Women of Color award and her career with pride and gratitude. “My work, path at Wheeler, and ability to serve families in New Britain all mean a great deal to me,” she said. “This recognition was wonderful in that it can serve as an inspiration to others. The truth is: You can work hard. You can overcome and achieve. It can happen. It does happen.”

Beginning in August, our child and adolescent patients at our Family Health & Wellness Centers can get a free backpack and school supplies thanks to the support of the United Way of Central and Northeastern Connecticut!