The Path to Acceptance - Robert's Story 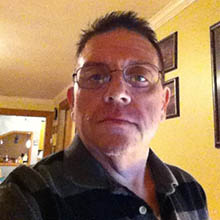 “For the first time in my life, I want to stay alive.”

Robert started drinking more than six years ago, following surgeries that required him to be on pain medications. An introverted and shy person, he began to depend on these medications to help him rest and take away the pain.

Shortly after one of the surgeries, he attended a family wedding. He had already started to drink a bit, but, at the wedding, it went to excess.

“I really enjoyed myself for the first time in a long time. I did not particularly care for being around people and I had a true hatred toward myself,” he says. He slowly found he needed to drink heavily to attend functions. “Alcohol began to take hold of me in the worst way possible. It was an answer to sleep and to go out.”

His depression continued and worsened, but he worked a full-time job and spent many hours there, as it was a comfortable place to be.

“I felt important and needed,” he says, but he would return home to his drinking and depression. Years of counseling and lying to friends and family led him to further episodes of binge drinking and unsuccessful attempts to quit.

“I’d show up to work most mornings, but I was by now drinking a bottle of whiskey or more every night. My reliability and work ethic suffered tremendously. My employer suspected for a long time that drinking was becoming an issue, but I continued to lie,” he says. “It got to the point that I no longer cared about anything or anyone. I’d wake up at night and figured that as long as I stopped drinking by 3 am, I could then go to work for 7 am, but I rarely made it in on time most days. I lived to get drunk and worked to buy whiskey. I couldn’t wait to get out of work and get another drink.”

He began to keep nipper bottles in the car so he could make it to the package store, and he frequented many different package stores so even they did not think he was as habitually drunk.

His sister moved in for a short time and watched him drink right in front of her and lie about it. She called an ambulance several times and wanted to know where the liquor was, but it was hidden in plain sight and he was proud of his ability to keep it hidden from her.

After a few trips to the hospital, Robert could not take it anymore. He admitted himself into an intensive inpatient program. Because of misunderstandings about his diagnosis and health issues, he was denied admittance to the program, and he also learned that he could not afford the treatment.

“The first three days of intensive inpatient treatment would have required a $500 daily co-pay out-of-pocket,” he says. “After that, I would have been responsible for 100% of the cost for the remainder of the 30 days.”

After ending up in the emergency department one evening and being discharged again, he found himself walking to his mother’s house, seven miles away, in the middle of the night with only a sweatshirt, shorts and slippers. His family tried to get him help.

Now laid off from his job, he decided to take the opportunity to seek out help and went to Wheeler, where he received assistance getting insurance coverage and began intensive outpatient services, medication-assisted treatment for addiction, and group therapy.

“Since I started here, I’ve searched out each group. They really have helped my recovery. I realized I’m not the only one here going through this,” he said. “I was worried at first, because you’re naturally afraid and embarrassed, but the longer I kept going, the easier it got.”

He receives Vivitrol, a medication-assisted treatment that removes the pleasurable sensations of drinking.

“Vivitrol is very helpful,” he says. “I am very happy that it is available and it is a monthly injection.”

He hopes his story can inspire others.

“I’m so happy I don’t have to live a lie. For the first time in a long time, I can walk the earth and be accepted for what I am. I go to groups in part so I can show others that I’ve done it, and I’m able to do it. It can happen to anyone. I want to be able to help the next guy. As far back as I can remember from childhood to now, for the first time in my life, I want to stay alive, and I don’t feel it’s better to be dead than to live.”

Robert hopes his story can help others.

“I have been sober and a better functioning man for more than eight months now and hope to continue to grow with my recovery,” he says. “But it is one day at a time, and I hope my life and story can help others strive for healing and recovery. I fully believe that in order to truly begin to recover, it is important to work on all aspects of your own life, don’t blame others, and take ownership of your feelings, emotions, and decisions. What brought you to this point? No matter what it is, it is yours to deal with. No one has the right to say it’s just an excuse, or to just ‘suck it up.’ We can’t walk in someone else’s shoes and cannot say what someone else should feel. “

Fred Greenleaf is a behavioral health intern at Wheeler whose journey to the career of helping people is a powerful and special one.

March is Problem Gambling Awareness Month, a time to acknowledge the challenges of problem gambling and remind individuals and families that hope and recovery are possible through Wheeler’s Bettor Choice Gambling Treatment Program, funded by the Connecticut Department of Mental Health and Addiction Services (DMHAS).

Five Reasons to Consult With a Registered Dietitian Nutritionist    03.10.2021

Registered dietitian nutritionists (RDN) are food and nutrition experts who can help translate the science of nutrition into practical solutions for healthy living. Working with an RDN can help individuals make unique, positive lifestyle changes.